EVENT: Full Workshop Production of "All Bark, No Bite"!!!!!!

Charlotte and Eugene live a quiet, no-nonsense lifestyle surrounded by sudoku and argyle. Robert and Bella are boisterous and messy and ridiculously in love. Then there's the neighbor, Suzanne, who basically doesn't know what's going on, but definitely has something to say about it.

Sure, relationships can be exciting! They can also be confusing, unexpected, and expose us to profound emotional risk. However, relationships are almost always worth exploring, and if we’re willing to be vulnerable, can fill up the empty or wounded spaces in our hearts.

And if that doesn’t work? Well, get a dog.

​
Second Chance Animal Shelter out of North Brookfield, MA will also be there to celebrate with some of their canine comrades.


If you can't make it for the premiere, you will have five other opportunities, so please mark one on your calendar now!


There is also a Pay-What-You-Can Preview / Open Dress Rehearsal on Thursday, June 2nd at 7:30PM.

All Bark, No Bite Workshop

All Bark, No Bite, written and directed by Kara Emily Krantz, will be premiering in June 2016 at the Singh Performing Arts Center in Whitinsville, MA.

First we rehearsed in my (Kara's) living room; the actors rose to the challenge! 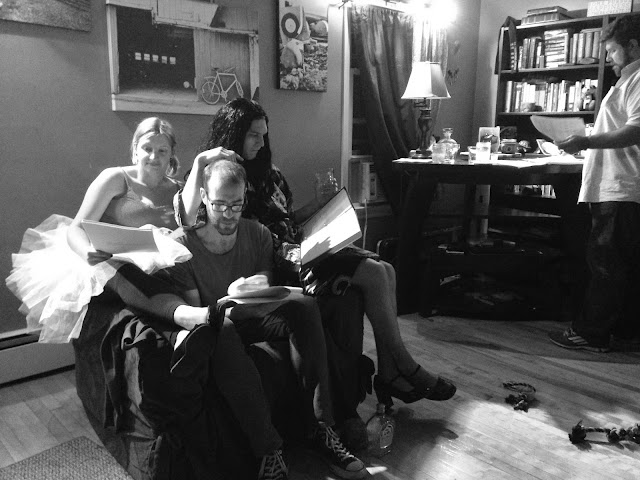 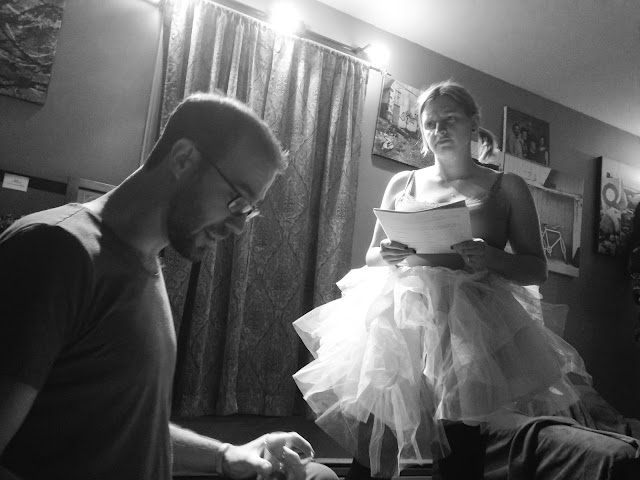 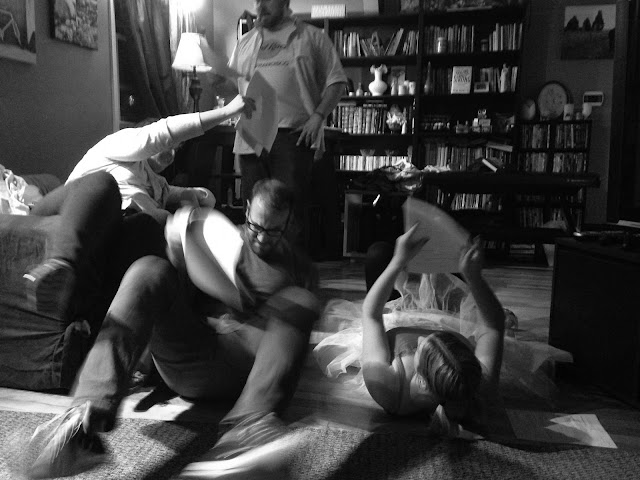 Then we prepped ourselves for the big event: 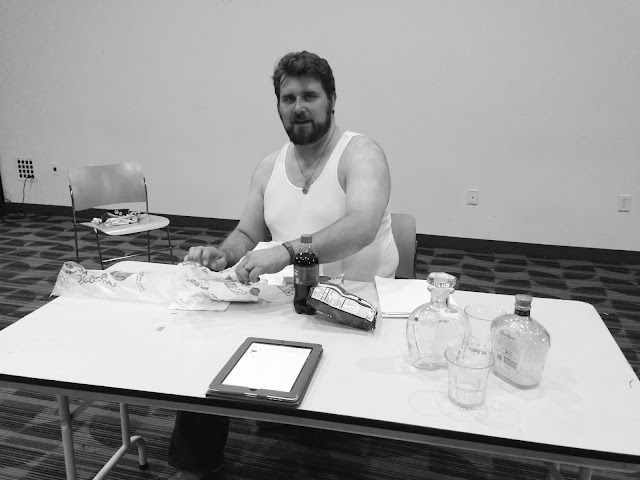 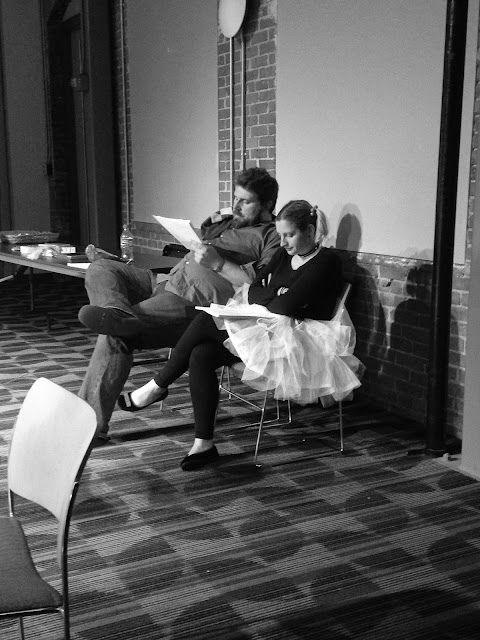 Scripts in hand, the actors rose to the challenge of conveying emotion, action and inflection into their characters, truly impressing the audience with their commitment and talent.

I am a very lucky director. 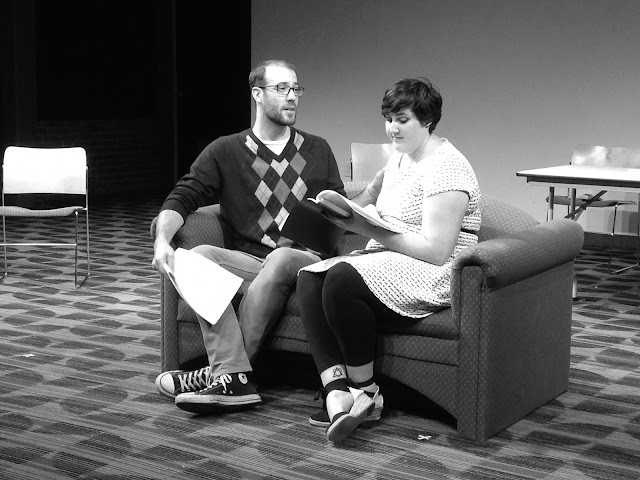 Heels were proudly strapped on. 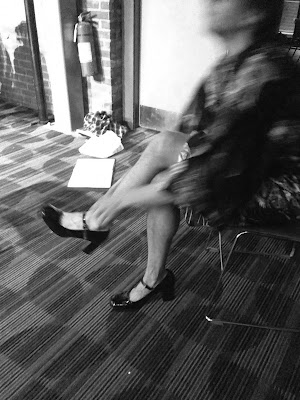 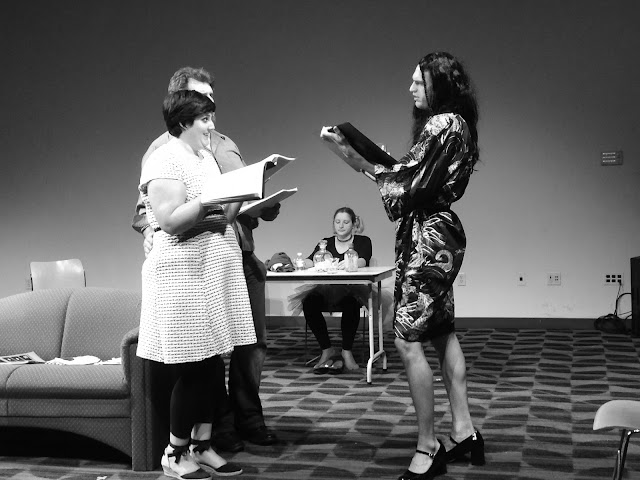 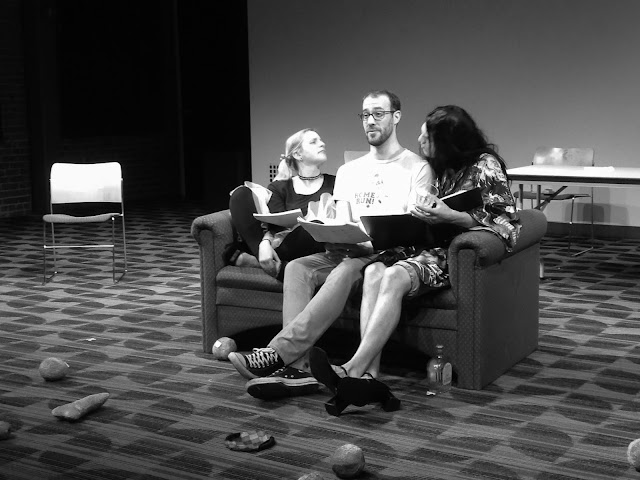 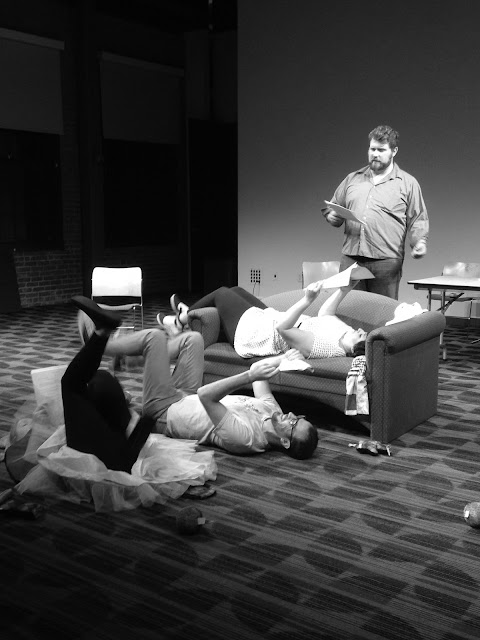 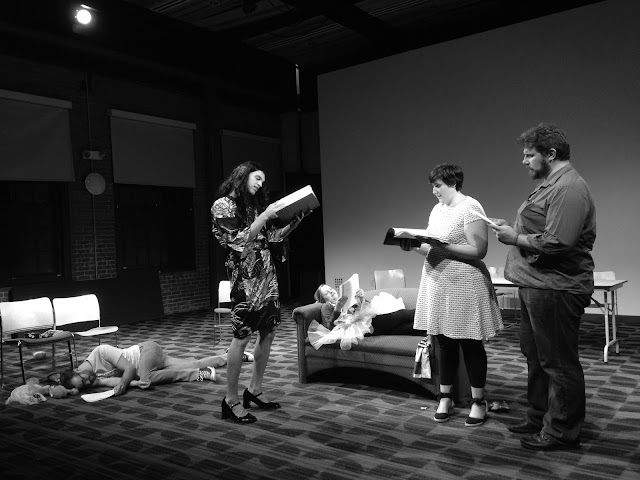 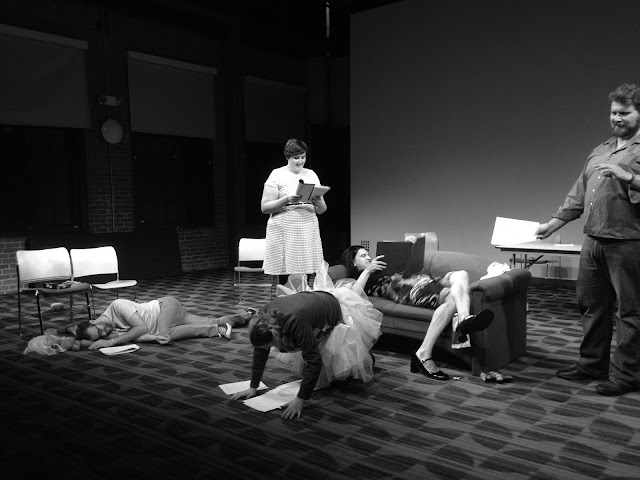 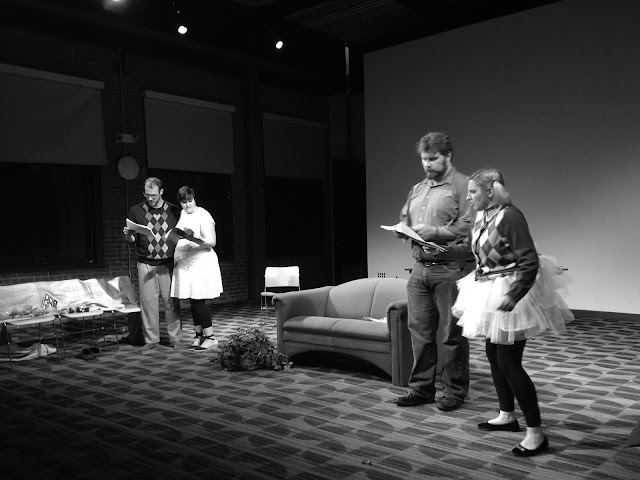 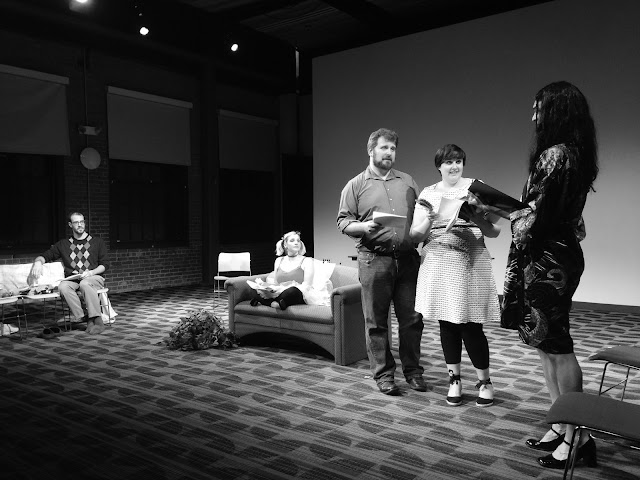 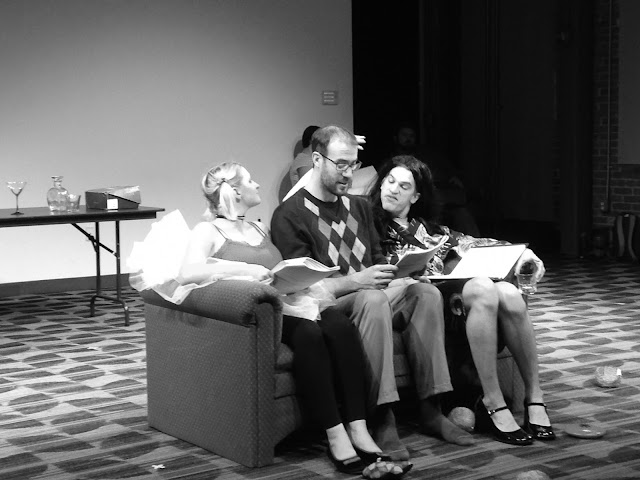 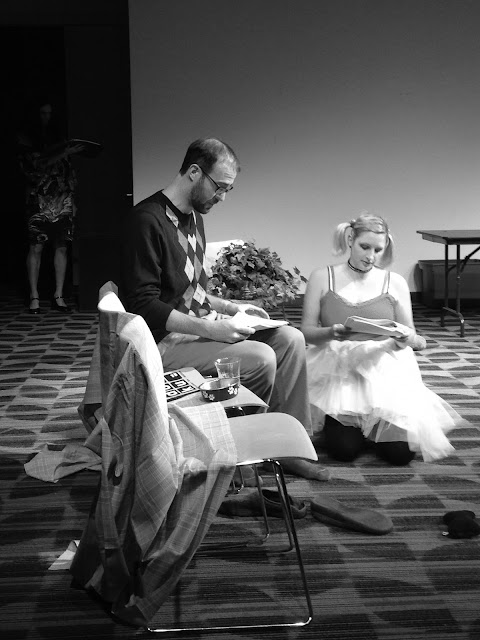 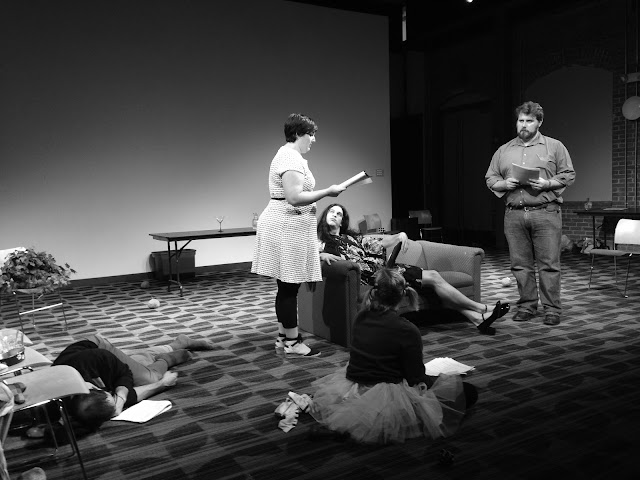 The feedback received from the audience was insightful, reflective, constructively honest and allowed us to move forward with a clearer understanding of where we needed to go.

Thanks to our friends, family and peers, the next draft of All Bark, No Bite will be a stronger, funnier version than before.

We look forward to seeing you at the premiere in June!

Special thanks to my incredible cast:

2015 One Act Festival on the Mumford!

This past weekend, Becoming More Productions took the stage with a rollicking and relevant new comedy entitled "Record Lows."

March 27 & 28th showcased the 2nd annual One Act Festival on the Mumford, sponsored by Alternatives, Inc and held at the G.B. & Lexi Singh Performance Center in Whitinsville, MA.

We entered this year's festival as reigning champions, having won first place (along with Anne Marie Shea) last year at the inaugural event with the performance of another original one act play, "Recess." Last year's performance was written and directed by myself, Kara Emily Krantz, and performed by David Plante and Michelle England.

This year we did not place at the top, but were certainly considered a crowd-pleaser. Our newest one act was written only two weeks prior to the festival date (I can be a procrastinator), resulting in a flurry of casting, reading, rehearsing, memorizing, and preparing. Luckily, I am surrounded by some truly understanding and exceptionally talented actors whom I can call at the last minute to hit balls out of parks. Michelle England and Wade Porter eagerly stepped to the plate and impressed us all with their authentically adorable and endearing performances.

Festival judges Kat Alix-Gaudreau, a professor at Framingham State University and Skip Shea, an award-winning filmmaker and actor, had wonderful feedback for the production, especially highlighting that Michelle and Wade possessed a "hard to find" type of chemistry that kept the audience engaged. Special remarks were made in appreciation for the cozy, worn-in feeling of the set, which was reminiscent of many New England living rooms during the long, cold winter: blankets, TV remotes, and cheeseballs.

A special vocal appearance was made by none other than my dear brother, Joel Krantz, who provided the voice for the Anchorman. And special thanks go to: Christopher Gates for his excellent work on lights and sound for the entire festival, as well as Dennis Rice, Executive Director of Alternatives, Inc who also bestowed his talents as a Master of Ceremonies (and teller of unfortunate knock-knock jokes).  Awards were given at the end of the night, including one to Stepping Stone Community Theater for Joey Andrade and Keith Ariel's original musical piece "Rehearsal Gone Wrong." In the realm of fellow original one-act plays, Vivian Eliza Nichols and Sarah Rae Brown brought home the award for New Original Work for their quirky and adorable piece "Maggie Moo and Jo-Jo the Destroyer: In Reverse," a tale of friendship that lasts for a lifetime.

"Record Lows" ran about 20 minutes in length, and focused on the tumultuous physical and interpersonal effects this past Winter in New England has had on us all. Sometimes sensitive, oftentimes chuckle-worthy, the script features quirky dialogue and snarky repartees. We hope you take the time to view the video and leave us some of your feedback. And Becoming More Productions hope to see (and entertain) you sometime soon!

Posted by Unknown at 5:39 PM No comments:

Becoming More Productions is a Reality!

Whether or not I believe it yet, Becoming More Productions has been culminating for the last couple years.

Becoming More Productions is a theater production company that focuses on original, local work.
Posted by Unknown at 4:39 AM No comments: